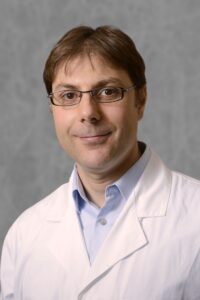 Dr. Massimo Iorizzo joined N.C. State University’s Plants for Human Health Institute (PHHI) in the summer of 2015. Transitioning from his previous position at the University of Wisconsin-Madison to PHHI, Iorizzo completed the carrot genome project in collaboration with his former mentor, Dr. Philipp Simon, as well as Dr. Hamid Ashrafi, a colleague at N.C. State, and other collaborators from around the world. This week, the results of their research, the full genome sequence of the carrot was published in Nature Genetics. The collaborative effort has resulted in one of the most complete vegetable genome assemblies to date. The genome sequence sheds light on the evolutionary origin of the carrot, the distinctive orange color of its root and its nutritional value, specifically the accumulation of carotenoids.

Iorizzo and colleagues assembled a reference genome using the DNA from one carrot genotype, identifying 32,113 genes, with 10,530 genes unique to carrot. For comparison, scientists estimate that the human genome is comprised of 24,000 genes. They identified a candidate gene responsible for the high accumulation of beta-carotene, a vitamin A precursor, in the orange carrot root. They compared the carrot sequence to other plant genomes and determined when carrots diverged from grape, kiwi and tomato. They then sequenced 35 different carrot specimens and subspecies, both wild and cultivated, to understand domestication patterns.

Iorizzo says, “The genome is going to significantly change the nature of research in carrot biology. The genome will serve as the basis in molecular breeding to assist in improving carrot traits such as enhanced levels of carotenoids, drought tolerance and disease resistance.” The primary focus of research of several laboratories around the world that conduct fundamental research on carrot genetics will shift more toward extensive genetic screens for genome-wide association analysis and functional genomics. 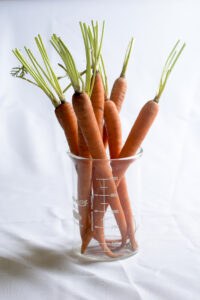 Carrot is a globally important root crop for farmers and consumers. According to the U.S. Department of Agriculture, American farmers devote more than 90,000 acres to carrot production, which yields a harvested crop valued at nearly $600 million. Orange carrots, containing high quantities of alpha- and beta-carotene, are the richest source of provitamin A in the U.S. diet. Breeding efforts have contributed to their increased nutritional value, leading the way to a 50 percent average increase in the carotene content of carrots compared to 40 years ago.

In addition to carotene, the carotenoid present in orange carrots, other nutritionally important carotenoids found in colorful carrots are lycopene (in red carrots) and lutein (in yellow carrots). Carotenoids are plant pigments that provide numerous health benefits. Research has shown that consumption of carotenoids decreases the risk of disease, particularly certain cancers and eye disease.

Iorizzo and Ashrafi are members of N.C. State’s Department of Horticultural Science. Iorizzo’s current research program at PHHI at the N.C. Research Campus aims to understand the genetic mechanisms controlling the accumulation and diversification of health-promoting phytochemicals in small fruit crops, such as berries, and vegetables. Ashrafi, a blueberry breeder, also works with genomic tools for molecular breeding through marker-assisted selection. Currently Iorizzo and Ashrafi’s lab teams are collaborating to establish advanced genomic resources for blueberry. Dr. Wayne Buhler, interim department head, asserts, “Dr. Iorizzo and Dr. Ashrafi help to further position our department as a leader in genomic-based breeding. We look forward to their advances in fruits and vegetables to assist with production challenges and improved human health benefits.”