How Epigenetics Could Change How We Grow Food

To understand epigenetics, nutrition, and the work of Dr. Tzung-Fu Hsieh, it helps to begin long before he was even born, back during World War II.

In fall of 1944, Nazis blockaded food from entering the Netherlands. That winter, a famine—now known as the Dutch Hunger Winter—ravaged the country. During the next eight months, more than 20,000 Dutch people died of starvation.

The impact on the health of the Netherlands didn’t stop when the blockade lifted, however. Women who were pregnant during the famine gave birth to children who experienced life-long health obstacles. As adults, these children were more prone to obesity and diabetes, and they had higher levels of LDL cholesterol.

How is it that this generation, who was still in utero during the famine, still suffered the effects of their mothers’ malnutrition? The answer relates to epigenetics. A mutation involves a permanent change to the DNA sequence, whereas epigenetics only involves a change to the activity of the gene leaving the sequence unaltered. Think of epigenetics as turning switches on or off within a gene, without changing the gene itself.

During the Dutch Hunger Winter, the malnutrition suffered by pregnant women affected them on an epigenetic level, which was then inherited by their children. The lack of nutrition didn’t create gene mutations, but it was substantial enough to change the activity of those genes – in a way, it flipped the switches. Those “flipped switches” had multi-generational health impacts, and raised many questions regarding environmental impacts on genetic activity.

If epigenetics can impact health negatively, could epigenetics also create positive health effects? Dr. Hsieh of N.C. State University’s Plants for Human Health Institute studies the potential of epigenetics to improve human health. For this, he studies the epigenetic phenomenon of gene imprinting, which relates to the activation or silencing of certain genes. While we inherit two working copies of most genes—one from each parent—we inherit only one working copy of an imprinted gene. The other remains silenced. Gene imprinting is found in both mammals and plants. Disruption in gene imprinting can cause diseases and several types of cancer in humans; in plants, when gene imprinting is disrupted, plants might produce larger or smaller seeds, or, in worst-case scenario, no viable seed at all. Understanding how the activation and silencing of these genes occurs can hold great potential in epigenetic research.

“If we know how the process is done, we can tweak the process,” Dr. Hsieh says. “How can we manipulate plants or seeds with epigenetics?”

In the field to table continuum, his work in human health begins in the agricultural field. Dr. Hsieh works to understand how the epigenetic switches are flipped within seeds, and how these switches may impact the plants, and resultant grain (or food product) that grow from them. In a model plant, Arabidopsis, the DEMETER gene is the master regulator that flips the epigenetic switches in seeds. Without DEMETER, the important genes that control seed development are not activated, or repressed, and the seeds die. As such, the gene’s name was inspired by Greek mythology, paying homage to Demeter, goddess of the harvest.

Dr. Hsieh’s group aims to elucidate how DEMETER knows which switch to turn on or off, and hopes to apply the knowledge to epigenetically activate or silence certain genes in plants in order to create advantageous results, like plants with greater disease resistance or higher-yielding crops. This is crucial work at a critical time: As climate change and urban development decreases the land available for crops, the resulting plants may produce more food in less space. The enhanced seeds could even create staple crops that produce a higher nutritional value, helping to offset nutritional deficiencies within a population. 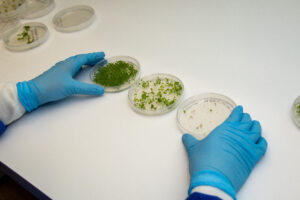 Toward achieving this goal, the Hsieh lab currently studies how the DEMETER protein finds its target sites in the genome. In a paper recently published in the Proceedings of the National Academy of Sciences journal, a team of international collaborators led by Dr. Hsieh reported that they have identified the region of the DEMETER protein responsible for its localization to the target genes to flip the epigenetic switch. This project is currently funded by a grant from the National Science Foundation (NSF) to Dr. Hsieh. According to the program director of NSF overseeing the project, “Dr. Hsieh’s discovery is very important because it begins to show how epigenetic regulators such as DEMETER are targeted to different regions of the flowering plant genome to control development and seed viability.”

“Soon we hope to separate the localization function of DEMETER from its catalytic activity, and use CRISPR-based techniques to guide this epigenetic switch to any genes of interest for epigenome editing purpose,” said Dr. Hsieh.

About 75 years ago, a Dutch famine created epigenetic effects that left generations with substantial health consequences. Now, scientists like Dr. Hsieh are working to use those same principles of epigenetics to harness that power in positive ways ultimately yielding an improved human condition.